Jonathan and I were looking for a simple dinner so we headed to the Earnest Bagel in Windsor for some fresh bagels.  The Earnest Bagel bakes fresh Montreal style bagels and they are an absolute delight.  They are great for breakfast, lunch and dinner.  We already had some cheeses and cold cuts at home.  I decided to do salami and cheddar, instead of the usual cream cheese – although that is one of my favourites too. 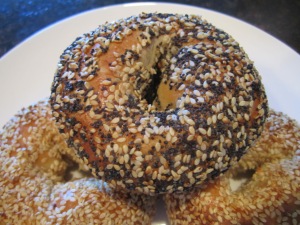 Fresh blackberries from Blenheim were available at Remark grocery store.  Remark is a great grocery store in Windsor that we love to go to for a treat.  Their produce is amazing and the shopping experience is more personal since the store is smaller than the big box grocery stores.  In addition to the blackberries – I couldn’t resist making it a berry trio with blackberries, strawberries and raspberries. 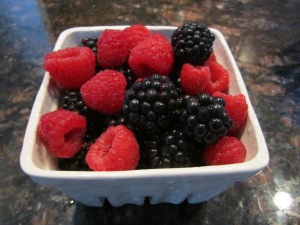 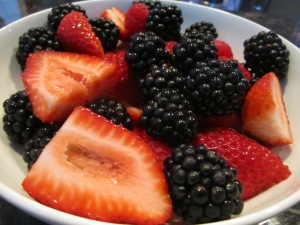 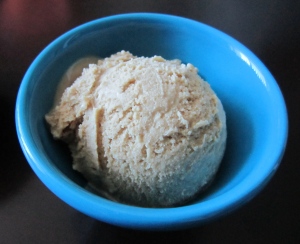 Well there is more to share about wonderful Montreal.  Starting with Schwartz’s famous smoked meat sandwiches. 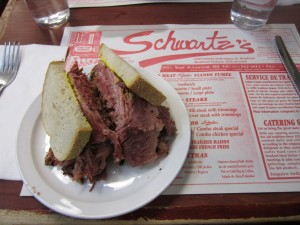 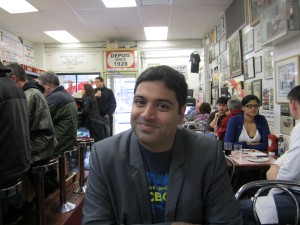 The next stop on our list of Montreal foodie things to list was to try bagels from Fairmount and St. Viateur Bagel.  While in the St. Viateur bagel shop they took a picture of me while they were making the bagels.  I was very excited by this.  The large oven and the smell of fresh bagels was a dream come true. 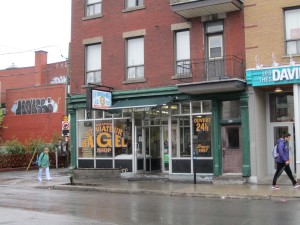 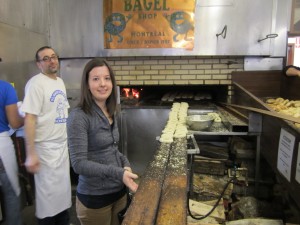 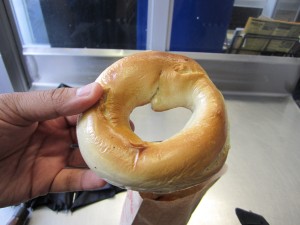 Jonathan has concluded that he likes the Fairmont bagels better, because of the crispier outside and soft inside.  I am undecided on which I prefer – I suppose I will have to go back and sample more bagels!

Next on the foodie institution list was Wilensky’s Light Lunch.  Wilensky’s is famous because of Mordecai Richler’s novel “The Apprenticeship of Duddy Kravitz.”  Jonathan and I ordered the Wilensky’s Special, which is a grilled salami and bologna sandwich with a splash of mustard on a egg bun known as a pletzl, pressed flat from the grill.  Mustard is compulsory and the sandwich shall never be cut in half, as a delightful sign in the restaurant states.

The sandwiches were delightful and tasty.  In addition to the sandwiches we also ordered fountain drinks from a real soda fountain.  Syrup is put into a glass, then soda water is added, and then it is stirred.  “The Apprenticeship of Duddy Kravitz” being one of Jonathan’s favourite books, eating at Wilensky’s made this lunch very special.  We were both delighted, enchanted and thrilled to be sitting in this historic restaurant.

From our trip to Montreal, I think we can safely say we had an authentic experience, and had great fun strolling through some Montreal neighbourhoods that have true character.